Wizard Kittens is a card game by Magpie Games.  It’s a competitive matching-style card game, where you’ll be fighting the clock as well as other players. The game is designed for 2-4 players aged 7 and up, and comes in an easily portable pack.

The Wizard Kittens game got its start on Kickstarter, where it received over 30 times the goal amount to make the dream a reality! Now, you’ll be able to find it at various retailers if you too want to be a mischievous kitten.

We got our hands on this delightful wizard kitty game and took it for a prowl. Here’s our take on this cute card game.

How long does a round of Wizard Kittens take?

An average game of Wizard Kittens lasts 15-20 minutes. If you haven’t played before, expect that to be closer to 30-40 while you learn the rules.

How big is the Wizard Kittens box?

The Wizard Kittens box is 5.5 x 7 x 1.5 inches and it weighs under a pound. It’s easily portable and makes a great stocking stuffer.

What is the Wizard Kittens bonus pack?

The Wizard Kittens bonus pack is a $10 add-on pack for the game that includes:

You can purchase the pack from Magpie games directly, or through resellers on Amazon

In addition to the bonus pack, there is a Wizard Kittens Magical Monsters (Amazon link) expansion pack. This add-on allows the game deck to accommodate a 5th player, while adding a new character, new monsters, and new adventure to explore.

How Do You Play Wizard Kittens?

If the Chaos card is drawn, this triggers the large chapter 3 card to be turned over into play. Remember this is only for 3-4 player games.

Add a remaining curse from your pool to this new chapter, and each player also turns over their small chapter 3 cards.

The player who drew the chaos card may then draw another card, so as to actually get a resource card on their turn.

Overall, I give Wizard Kittens an 8/10. The artwork is playful and colorful, bringing each card to life. With all of the different variations of cards, rules, and expansions it has a ton of replayability and never gets boring.

I also appreciate that it’s a fairly short game, making it easy to play whenever you have a little time. My only negative to it is that even as an adult I found it a little complicated at first, so I feel that younger children may struggle. I’d probably say 10+ as my personal recommendation.

This wizard cats game is definitely one that I’m glad to have in the bag (literally) as it’s perfect for family game night as well as entertainment while traveling.

If you’re picking up your own copy of the Wizard Kittens card game, here are some sites you can buy it for price comparison:

Done being a wizard kitty for a while? Here are some other games we love, and think you will too!

Instead of collection curse-breaking ingredients, put together drink components in the Sabobatage card game

If you enjoy the chaos of the new rules cards, then you’ll love Fluxx, the card game of ever-changing rules!

Raccoons are related to kitties, right? Well, try their card game out too in Trash Pandas!

Let the the Stranger Things Eggo card game take you back to the 80’s as you escape the Upside Down! 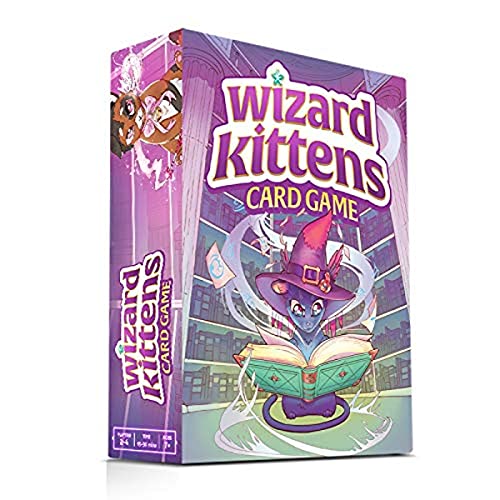 Back to the Future Wireless Charger - Skateboard Marty

$19.23
Added to wishlistRemoved from wishlist 0