Ah, summertime. To me, that’s memories of making s’mores around the campfire. Consequently, it’s also reminiscent of bags of stale marshmallows everywhere. What if I told you that you didn’t need to toss them? Turn them into ammo for your marshmallow blaster gun instead!

Things got a little sweet and sticky here, but I’m pleased to report that a lot of fun was had. So, here’s our review of the marshmallow blaster if you’re looking to add one to your summer arsenal.

What is a Marshmallow Blaster Gun?

A marshmallow blaster gun is a toy similar in style to a NERF blaster. However, instead of using foam darts as ammo, this variant uses squishy marshmallows.

This particular model uses mini-sized marshmallows you can find at nearly any grocery store. Thankfully, I find it works pretty well even if they’re stale, so it’s a great use for marshmallows that are “past their prime”.

Pros and Cons: Things to Know About the Zing Marshmallow Blaster Gun

Are There Different Versions of the Zing Marshmallow Blaster?

Yes, there are 5 different versions of the Zing marshmallow blasters:

Extreme
Blaster
Check Prices
Bottom Line
The extreme marshmallow blaster features pump-action firing, but it looks like a mix of a shotgun and a rocket launcher!

Blaster
Bow
Check Prices
Bottom Line
Just like a bow and arrow, you pull back a string to launch mini marshmallows. It’s also available in a mini bow option.

Marshmallow Slingshot
Check Prices
Bottom Line
The marshmallow slingshot is designed for kids (14+). Shoots with pull and release, and carries extra “ammo” in the handle.

How Does a Marshmallow Blaster Work?

Increasing the force increases the distance the marshmallow will travel. Those models with larger tubes that create more air compression will launch further.

How Do I Keep the Marshmallows From Sticking in the Blaster Gun?

To keep marshmallows from sticking in the ammo compartment of the blaster gun, there are two options:

1. Use stale marshmallows that are no longer sticky to the touch
2. Toss the marshmallows in a container with cornstarch to coat them

The latter option actually creates a fun “poof” when the marshmallow is launched that looks like smoke!

Can You Use a Marshmallow Blaster Gun With Other Candies?

No, the marshmallow blaster guns are specifically designed for use with marshmallows. Other candies will get stuck, refuse to launch, or just generally not work.

The only other option would be a foam marshmallow-shaped toy of the same size.

In short: While it’s actually a pretty comparable marshmallow launcher, unfortunately this little blaster isn’t currently in production. We know it first came out in 2009, but it’s unclear when it was pulled. However, if you’d like, you may still find some on eBay or other third party reselling sites.

Compared to the Zing, a NERF Marshmallow Shooter:

The NERF model is pretty cool as well, but there’s a catch (isn’t there always). See, they’re not actually available year-around. The NERF marshmallow shooter only comes as part of a special Easter basket release, along with some candies and other toys.

Since you’re only able to find it once a year (at retailers like Target, if you’re looking) this makes it tricky to obtain. Plus, you’ll get a lot of other items along with it which you may not care about.

If you’re truly ambitious, you can always modify an existing Nerf gun to turn it into a marshmallow launcher.

Compared to the Zing, a Smart Gear Marshmallow Raider:

In short: For what, at face value, appears to be a comparable toy, I was disappointed in the Smart Gear model. It’s slightly more expensive, holds less ammo, and is far more prone to jamming and misfiring than its Zing counterpart.

It should also be noted, if you’ve seen similar blasters under the Marshmallow Fun Co brand, they were acquired by Zing in 2019. So, these are the same toys, just under a different label.

Our Overall Ratings of the Zing Marshmallow Blaster Gun

I truly love that this is a safe, fun, family friendly toy that reinforces hand eye coordination. It loses points because of the marshmallows appearing everywhere and the overall sticky, dusty parts.

If you’re looking for a fun activity that the whole family will enjoy, these marshmallow blasters are great fun. I do recommend using them outside though, unless you want to be finding marshmallows for weeks.

You do need to take the time to make your marshmallows stale (or use up old ones) or to coat them in cornstarch for the blasters to work well. Otherwise, they have a tendency to get sticky and not shoot, which isn’t a whole lot of fun.

If you want to get your own marshmallow blaster gun, here are some different options for price comparison:

Here are some other similar products you may enjoy:

The ArmoGear laser tag spider target gives you a battling bug as an adversary!

Speaking of lasers, use them to play games on your walls with the Projex projecting arcade game

The Wall Projecting Virtual Target Game
This is the wall projecting arcade game that challenges children to take aim at virtual targets with laser blasters. The rotating console projects images of bullseyes, U.F.O.s, or ducks on the wall of a darkened room as two players battle for the highest score. The system console comes with five...
$69.95
Buy Now

No matter what you’re rocking, this Nerf Command Base Battle Fort makes the perfect headquarters

Get some accuracy practice in with Astroshot Zero floating ball targets 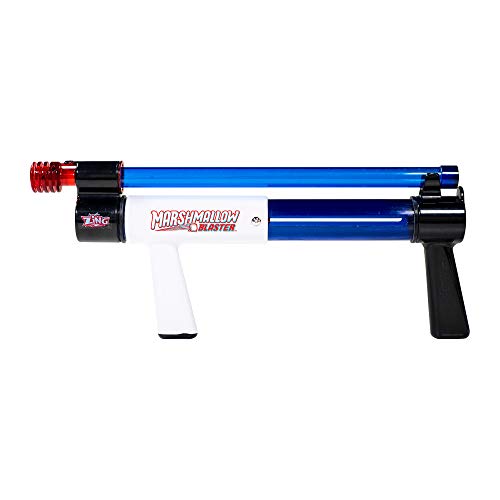 Zing Marshmallow Pump Action Blaster - Great for Indoor and Outdoor Play, Launches up to 30 Feet For Ages 8 and Up

out of stock
Buy Now
Amazon.com

$36.99
Added to wishlistRemoved from wishlist 0